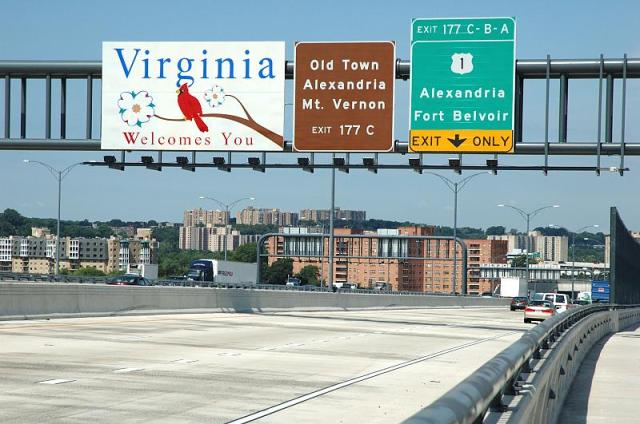 A Maryland man has done the unthinkable at the start of a busy rush hour commute here in the Washington D.C. area.

Reports have just confirmed that a man jump off an overpass onto a moving tractor-trailer traveling across the iconic Woodrow Wilson Bridge on I-95 linking Virgina to Maryland. (pictured above).  What a horrible way for someone to kill themselves!

Around 2:30 p.m. on Tuesday, October 25, someone called 911 after spotting a man atop a tractor-trailer truck on the interstate highway.

Police pulled the vehicle over at exit 166 in Woodbridge and discovered a dead body lying on the canvas covering of the truck’s open-bedded trailer.

The deceased has been identified as Jeffrey Matheny, 38, of Gaithersburg, MD. Police are investigating the death as an apparent suicide.

Investigators said the 911 call came from a motorist traveling behind the truck. According to the witness, Matheny went over the railing of the pedestrian overpass at the Woodrow Wilson Bridge in Virginia.

From the Woodrow Wilson Bridge, the body traveled 11 miles before officers caught up with the driver and pulled him over. [source]

This entry was posted in DMV NEWS. Bookmark the permalink.