WORD ON THE STEETS: TAMAR BRAXTON IS BEEFING WITH TONI BRXTON OVER FIRING OF HER HUSBAND?

If you seen the new sneak peek of the upcoming Season 2 of Braxton Family Values, you may have slighty noticed that Toni Braxton is nowhere to be found.

Every since Toni Braxton fired her longtime manager Vince Herbert (Tamar’s husband) the relationship between Toni and Tamar has “allegedly” heated up.

According to sources, the drama in the air is now so thick that Toni “won’t be anywhere near Tamar.”  But can this really be true? Are they serious beefing over that or is this some pure gossip?

Toni Brxton has fired her longtime manager Vince Herbert, who is married to her sister, Tamar Braxton. Herbert has also managed Lady Gaga and produced music for Destiny’s Child. Tension has been a theme in their WE tv show, “Braxton Family Values.”

A source told us that Toni “won’t be anywhere near Tamar. This has caused more family problems.” Toni’s rep confirmed that she’s no longer working with Herbert but, “Has a great personal and professional relationship with Vince….adding the Braxtons were, “Still very close.” [source]

Yes those Braxton’s girls are very much “still close“.  Just last week Toni & Tamar was spotted having dinner together at Katsuya in Hollywood (pics below).  I know one thing a picture tell a thousand words, and according to those photos they very much enjoy one another despite the reports.

I’m sure there is probably a little drama behind the scenes which is expected. I mean how would you feel if your sister fired your husband.  However, at the end of the day it’s going to take more than a man to break those Braxton sister’s apart.  Blood is always thicker than water. 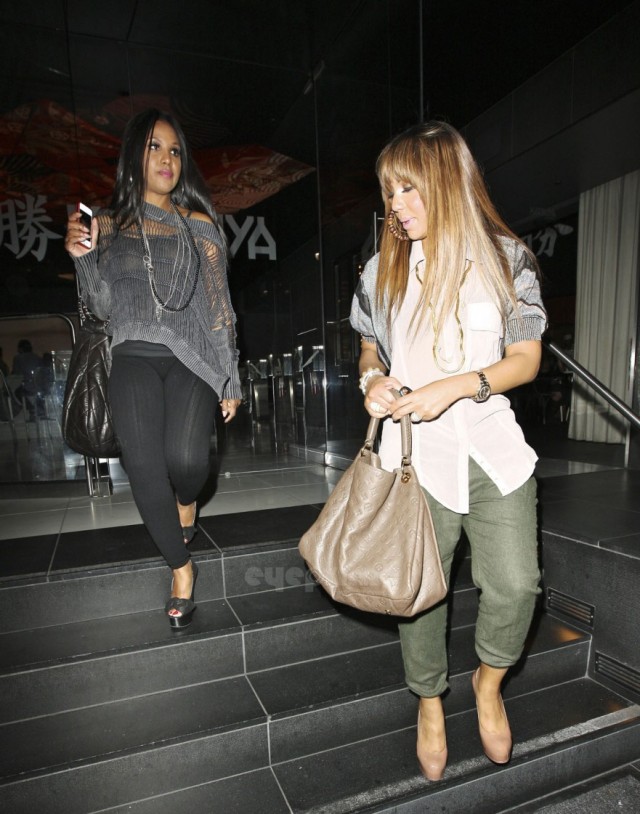 2 Responses to WORD ON THE STEETS: TAMAR BRAXTON IS BEEFING WITH TONI BRXTON OVER FIRING OF HER HUSBAND?