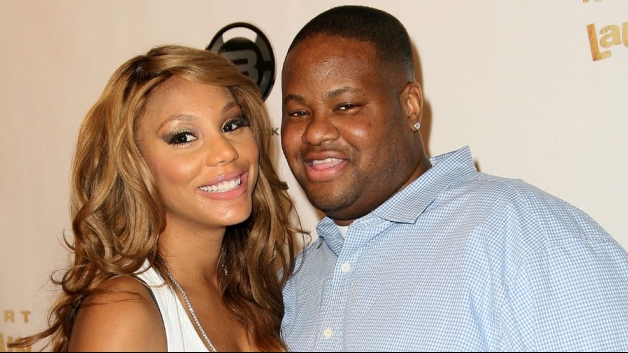 As the leading lady in Toni Braxton’s family reality show “Braxton Family Values“,  Tamar is gearing up to branch out on her own.   The wanna drop it like it’s HOT singer revealed a few details about her very own spin-off show creativley dubbed “Tamar & Vince“.

During an interview with The Insider, she talked about her new show, her upcoming new album, plans for children and her new 6.9 million dollar mansion.  Pop the hood for the deets.

TheInsider.com: Reports just came out about your new mansion 6.9 million dollar mansion in Hidden Hills, Ca. Are you bi-coastal now?
Tamar: Yeah, as of now we are. I just want to say something about that. I just can’t believe that got out. It’s not like we just bought the house. We’ve had it for at least four months now!

TheInsider.com: Some people are saying maybe the new house was purchased just for the new show. Or that the show bought it for you.
Tamar: Oh please! People can have a seat! Let me tell you, Vince is not even the kind of guy that would let anybody do anything like that. Number one, he’s a real man and number three (Ed note: Yes she jumped from one to three!) he’s not an opportunist like that. He bought the house because he loved the house.

TheInsider.com: Your new place is so big, will any of your sisters be living with you?
Tamar: Absolutely no! Everybody is grown and has their own house. [Laughs]

TheInsider.com: So there are five bedrooms in the house. Any chance you got so many because you want to hear the pitter patter of little feet? And I don’t mean puppies!
Tamar: Well … in the future maybe! We’ve only been married three years. We have time! We’ll get it out there! [Laughs]

TheInsider.com: Will you have a recording studio in the new house?
Tamar: No, we actually got this house to be away from the city and have a sense of being home. But Vince did build me a beauty room! And I’m so excited about it!

TheInsider.com: What can we expect to see from Tamar and Vince in the new reality show that is different from Braxton Family Values?
Tamar: Well, you know, everyone sees me as Tamar the loud mouth outspoken sister. Now you get to see me as Tamar, Vincent’s wife. I do have a different personality when I’m in the wife role. I think that’s important, you need that balance.

TheInsider.com: You do have a successful marriage and there are few married couple reality shows and even fewer geared at African-Americans. Why do you think that is?
Tamar: I think that there are a lot of people who are just not married! And while it’s okay NOT to be married. It’s also okay TO be married! I just want to show the side. It’s great to have that foundation, but it’s also okay to be yourself too. And have fun with your life. You really can have it all and you don’t have to settle.

TheInsider.com: Will you give people insight into achieving it all?
Tamar: Definitely. That’s the whole point of us doing it. It’s important to me that people don’t roll over, they can have everything they want!

TheInsider.com: Will we see any interaction of Vince’s family on the show?
Tamar: I don’t know yet! That’s really up to Vince, whatever he wants to do, I’ll totally support it. If they come into his life again, then hopefully everyone gets to see that. Everything is not the Braxton family, where everybody is raised close and everybody is close friends. Some people stop talking along the way, some people stop being close along the way, and I think that’s important to see too.

TheInsider.com: You’re working on an album, what kind of music are we going to hear?
Tamar: I definitely don’t think you’ve heard this from me before. At first I wasn’t allowed to sing what I wanted to sing and I think that’s where the frustration came from before. It’s opinionated, it’s funky, it’s fresh. This is the true definition of Tamar.

TheInsider.com: Will there be any other artists that you plan on working with for the album?
Tamar: Not as of now. And I’m fine with that. I’ve waited my life to do MY record. SO I’m cool rocking with myself! [Laughs]

TheInsider.com: Is there a release date set?
Tamar: Definitely coming out next year.