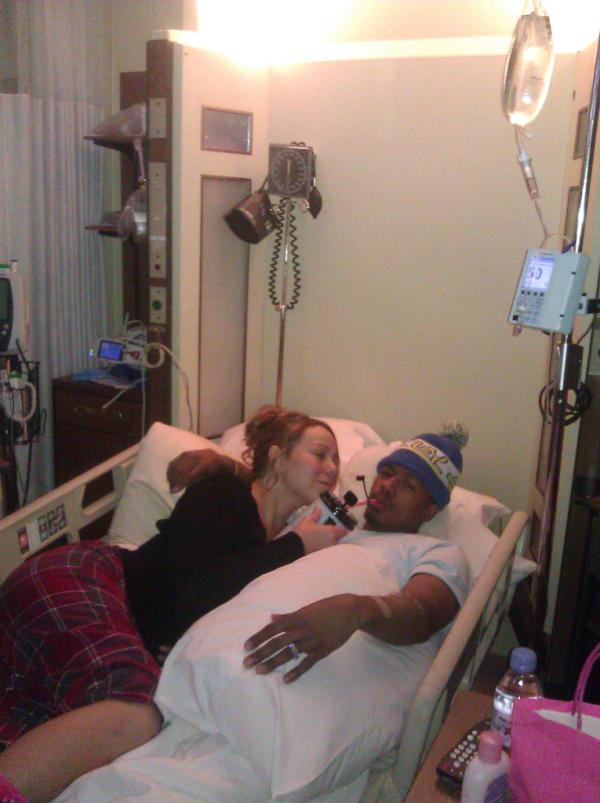 The year 2012 is starting off a bit rocky for the Cannons but God is in control! This morning Mariah Carey-Cannon broke news via twitter that he hubby Nick has been rushed to a local hospital is Aspen, CO. After being checked out my doctor’s it was revealed he suffered a “mild kidney failure“.

As you all know a mild kidney failure is something serious and could have been a lot worst. According to Mariah, he’s currently recovering and wrote a blog message to fans asking for prayer’s.

Mariah’s message to fans reads (with the above photo attached):

This is us in the hospital – role reversal; Last year it was me attached to the machines (after having dembabies) and Nick was there with me through it, and now here we are.

We’re trying to be as festive as possible under the circumstances but please keep Nick in your thoughts because this is very painful. They tried to kick me out of the hospital but here I am pon de bed with Mr. C.

We’re doing OK but we’re “straaaaaanded in Aspen”. #DramaticDivaPlace (I know, we could be in a lot worse places) but the truth is as long as we’re together, we’re OK. I’m not trying to make light out of the situation because it’s a serious moment that’s very tough on all of us so please keep us and our family in your prayers. [source]

Please keep Nick in your prayer’s. You just never know what cards life will deal you. Just when you blink your whole world can change in a matter or seconds….