CHURCH FOLKS! CREFLO DOLLAR DOESN’T GIVE A “FAWK” ABOUT WHAT YOU THINK…. 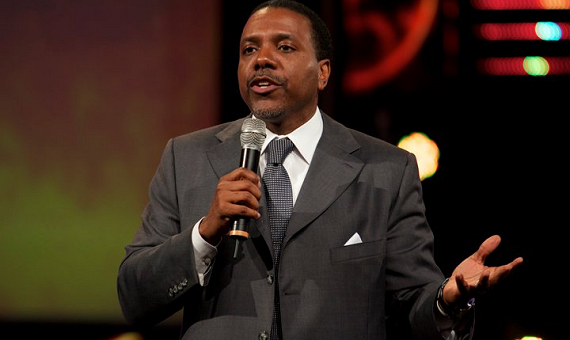 Creflo Dollar does not give a fawk about your comments or about how you think he should discipline his child.  Creflo was arrested on Friday after being accused of “choking” and “punching” his daughter during an apparently domestic violence situation.  However, according to Creflo, he ain’t hit her azz once!

An Atlanta megachurch pastor who is accused of domestic violence on Sunday vehemently denied the charges from the pulpit, telling his congregation that he never attacked his teenage daughter.

Creflo Dollar, who was arrested on Friday on charges of family violence, child cruelty and battery, called the accusations “an exaggeration and sensationalism.”

“The truth is, she was not choked, she was not punched,” he said at World Changers Church International, which boasts nearly 30,000 members and numerous satellites.

Police arrested Dollar after his 15-year-old daughter reported he choked and hit her during an argument at their home.

Dollar, who was released from jail on $5,000 bail, said on Sunday that the mark on her neck was a skin condition. [source]

I personally don’t promote or agree with domestic violence in any form or fashion; however, as a parent you do have an obligation to whoop your child’s azz if they get out of line! I don’t know what took place cause I was not there but I do know that in the African-American community parents belive in whopping some azz if they need too!

Yes, I have gotten my azz whooped by my parents a few times when I was growing up but they never tried to “choke” me; it’s a thin line between disciplining your child and trying to kill them. To this day, I thank God for all the whooping’s I receievd; those tears made me the man I am today.

In regards to church folks; no matter how much Jesus you have in your soul (mind you I have a lot of Jesus in me); I’m sure you some of y’all have whooped your child’s azz too when they got out of line.

We need to stop judging someone else’s fault (including me) and remember that everyone no matter what position they are in (ex. politician, pastor’s, etc) are still human.  If he did choke his daughter then by all means he should be locked up but until then…he’s a free man.

Maybe if more parents would stop “whooping azz” like they did back in the old days, some of these kids would have some darn sense. (ex. sagging pants, no respect, cursing, bad manner’s, etc)

This entry was posted in SAY WHAAT!, SAY WORD! and tagged CREFLO DOLLAR. Bookmark the permalink.