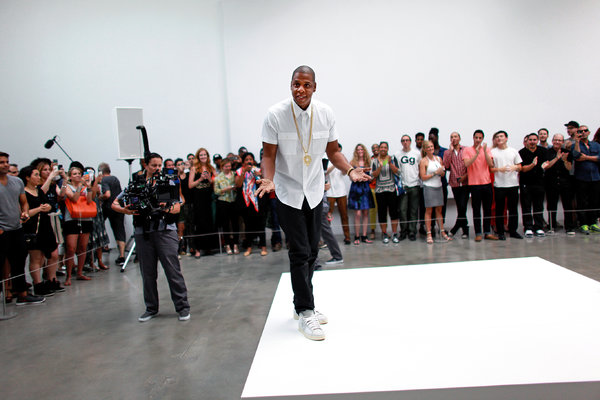 Jay Z is on the verge of silencing all of your favorites once again! Hov has teamed up with HBO to unwrap his new ‘Picasso Baby‘ art inspired music video to the masses. The video is set to premiere Friday Aug. 2nd at 11pm on HBO.  Check out the preview below.

According to reports, Jay-Z performed the cut for for six hours straight at NYC’s Pace Gallery, the rapper’s music video shoot was inspired by the work of performance artist Marina Abramović, who was also in attendance for the show. Wearing a crisp shirt and gold chain, Jay-Z spent the whole day prancing around Pace’s white-box gallery, performing the Magna Carta Holy Grail track to a crowd of delighted onlookers.

Jay-Z faced off with strangers – as well as some well-known faces such as director Judd Apatow, the rapper Wale, Lena Dunham’s mum and the artist Laurie Simmons. Jay-Z said he was planning to release “six pieces of art” to accompany his new album: this video, directed by Mark Romanek, is presumably the first. – The Guardian

This entry was posted in MOVIE NEWS, TELEVISION and tagged JAY Z. Bookmark the permalink.